Desta: To Whom the Lions Bow — Getty T. Ambau 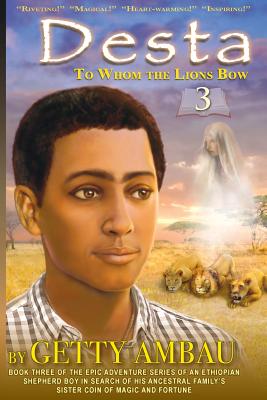 
Desta's story unites with all humanity's in this panoramic, magical, and metamorphic 3rd phase of his journey to fulfill the sacred ancient quest entrusted to him. As he discovers just how much his life is bound up with the ancient world, powerful spirits, and his country's glorious past, he must resist the competing designs of others on King Solomon s twin magic coins. Desta relies on his wits and the power of the coin as he navigates betrayal, tragedy, challenges in school, and the intercession of unbidden voices, prismatic spirits, and delivered dictums. As his horizons widen, he must weigh the value and perils of new opportunities brought by visitors from the larger world. Through it all, with acceptance, forgiveness, and hard-won faith in himself, Desta is transformed from homeless fourth-grader to celebrated graduate and the pride of his family. As he transits to manhood, his own accomplishments and experiences teach him that the world is truly his family, but that his fated path is his alone.