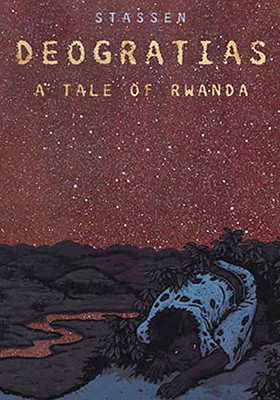 The 2000 winner of the Goscinny Prize for outstanding graphic novel script, this is the harrowing tale of the Tutsi genocide in Rwanda, as seen through the eyes of a boy named Deogratias. He is an ordinary teenager, in love with a girl named Bénigne, but Deogratias is a Hutu and Bénigne is a Tutsi who dies in the genocide, and Deogratias himself plays a part in her death. As the story circles around but never depicts the terror and brutality of an entire country descending into violence, we watch Deogratias in his pursuit of Bénigne, and we see his grief and descent into madness following her death, as he comes to believe he is a dog.
Told with great artistry and intelligence, this book offers a window into a dark chapter of recent human history and exposes the West's role in the tragedy. Stassen's interweaving of the aftermath of the genocide and the events leading up to it heightens the impact of the horror, giving powerful expression to the unspeakable, indescribable experience of ordinary Hutus caught up in the violence. Difficult, beautiful, honest, and heartbreaking, this is a major work by a masterful artist.
Reviews from Goodreads.com