DeKok and the Geese of Death — A.C. Baantjer 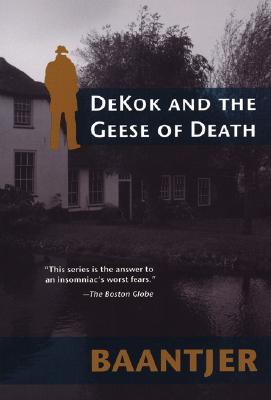 “DeKok’s maverick personality certainly makes him a compassionate judge of other outsiders and an astute analyst of antisocial behavior.”—The New York Times Book Review
“Baantjer has created an odd police detective who roams Amsterdam interacting with the widest possible range of antisocial types. This series is the answer to an insomniac’s worst fears.”—The Boston Globe
“Baantjer’s laconic, rapid-fire storytelling has spun out a surprisingly complex web of mysteries.”—Kirkus Reviews
“DeKok is a careful, compassionate policeman in the -tradition of Maigret; crime fans will enjoy this . . .” —Library Journal
“It’s easy to understand the appeal of Amsterdam police detective DeKok.”—The Los Angeles Times
Renowned mystery author A.C. Baantjer brings to life Inspector DeKok in another stirring potboiler full of suspenseful twists and unusual conclusions.
In The Geese of Death, DeKok takes on Igor Stablinsky, a man accused of bludgeoning a wealthy old man and his wife. To DeKok’s unfailing eye the killing urge is visibly present in the suspect during questioning, but did he commit this particular crime?
All signs point to one of the few remaining estates in Holland. The answer lies within a strange family, suspicions of incest, deadly geese and a horrifying mansion. Baantjer’s perceptive style brings to light the essences of his characters, touching his audience with subtle wit and irony.
A.C. Baantjer is one of the most widely read authors in the Netherlands. A former detective inspector of the Amsterdam Police, his fictional characters reflect the depth and personality of individuals encountered during his 38-year career in law enforcement.
Reviews from Goodreads.com