Dekok and the Corpse by Return — A.C. Baantjer 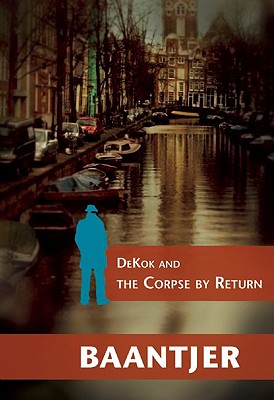 Inspector DeKok awakens one morning to a call from a local radio personality. The caller alerts him that he has been selected by one of their listeners as the famous Dutchman they would like most to meet. DeKok and eighteen-year-old Sandra Verloop never expect that this chance meeting will plant them squarely in the middle of a murder investigation.
Driving Sandra home after a day of shadowing his police work, DeKok pulls over to help a stranded motorist. DeKok doesn't realize that when he stepped out of the car to inquire about the man's automotive troubles, Sandra noticed a woman in the car. Although she had never seen a corpse before, there was no question that the woman was dead.
After they drop the man off, the frightened Sandra quickly tells DeKok what she saw. They drive back to the spot where they had left the car, only to find it missing. What remains are Sandra's vision of the dead woman and DeKok's recollection of the tattoo on the man's hand, a bundle of arrows held in a claw.
A. C. Baantjer is one of the most widely read authors in the Netherlands. His fictional characters reflect the depth and personality of individuals encountered during his thirty-eight-year career as a detective inspector of the Amsterdam police. The fifty-plus crime novels featuring Inspector DeKok have achieved a large following among readers in the Netherlands. They continue to conquer new territory in these highly acclaimed English translations.
Reviews from Goodreads.com