Defined by Deceit — A.E. Via 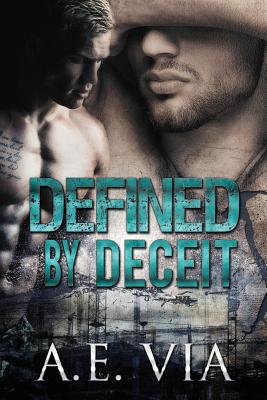 Share:
Life isn't always fair, and that’s something that Llewellyn Gardner knows about first hand. His life was on the fast track until one night of extreme passion changed everything. Now eight years later, he’s still living with the aftershocks of that night. Everywhere he turns or runs, there’s another reminder. What the hell do you do when you try to drown your demons only to find out they can swim? Shane Smith, Jr. owner of Smith Construction, could see the emotional turmoil within his new employee — it’s why he hired him. There was something about the gorgeous, misunderstood man with the overly expressive eyes that came to their small town with a past no one was willing to overlook. Shane could see the good in Llewellyn, and those eyes of his were a clear window to his soul. Shane wasn't going to let the man live a future of solitude because his past had been plagued with deceit. Llewellyn wasn’t sure what to think about Shane. After years of protecting himself from being tricked twice, he was now faced with worry again. What would happen to him if Shane didn’t believe his truth, and walked away? Llewellyn wasn’t sure he’d be able to survive being left alone. Again.