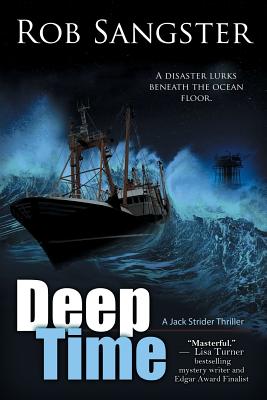 
"Wild ride, in-depth characters, compelling plot, cutting-edge issues." Marq de Villiers, prize winning author, Order of Canada award.
"Masterful, high-stakes suspense thriller." Lisa Turner, bestselling mystery writer, Edgar Award nominee.
A disaster lurks beneath the ocean floor.
A riveting Jack Strider suspense
Deep in the Earth's crust beneath the Pacific Ocean lies an ancient site likely to be the birthplace of life on our planet . . .
And a portal into unimaginable forces and incredible wealth . .
A place where large ships mysteriously disappear, including the vessel carrying Jack Strider's goddaughter, Katie . . .
A greedy energy baron risks everything to pursue vast supplies of power trapped deep in the Pacific Ocean sea bed off the Oregon coast. But the man's psychopathic scheme is about to launch a terrifying tsunami that will destroy the entire west coast of the United States. Strider's beautiful, brilliant partner in law and love joins the fight, and Jack leads a desperate attack on the largest offshore platform ever built. Jack Strider may be the only man who can stop the disaster that is already underway . . . or maybe no one can.
Rob Sangster is an award-winning author, Stanford lawyer, newspaper columnist, sailor, rock climber, and has traveled in 110 countries so far. He and his mystery writer wife divide their time between homes in Memphis and on the wild coast of Nova Scotia.
robsangster.com/books.html; facebook.com/rob.sangster.author; [email protected]