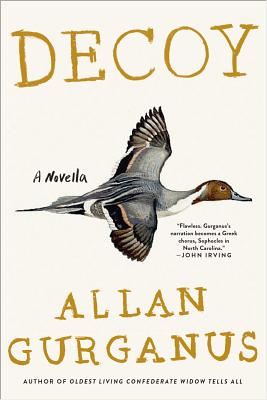 “If there remains any doubt about Allan Gurganus’s literary greatness, Local Souls should put this to rest forever.”―Jamie Quatro, New York Times Book ReviewDecoy, the concluding novella of Allan Gurganus’s hugely acclaimed Local Souls, was hailed as the standout of that work. Critics called it “humane, profound, hilarious, nostalgic, the literary equivalent of a bare-knuckled knockout punch” (Miami Herald). Like Kazuo Ishiguro’s The Remains of the Day it is a haunting lyrical portrayal of a life half-led. Set in mythical Falls, North Carolina, this mysterious and compelling tale maps the lifelong eroticized friendship between two married men. When Doc Roper, the town’s beloved physician, announces he is retiring from practice to carve exquisite duck decoys, he triggers an epidemic of catastrophes. His dependent patient and next-door neighbor, Bill Mabry, feels cut loose. Then the close-knit town is devastated by a flood of near-biblical proportions. Working inexorably “to an unexpected moment of catharsis” (Dwight Garner, New York Times) Decoy―already emerging as an essential work of American literature―charts the tender border between life and death.
Reviews from Goodreads.com