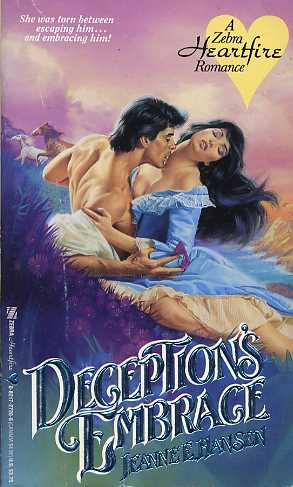 DESPERATE FLIGHT
Katrina Montgomery had to run for her life. Her stepfather would kill to get the wealth she would inherit in just a few months-but if she could survive until then, she'd have the power to fight him. So the terrified heiress fled Memphis with what little she could carry and headed west, hiding in a freight car. By the time she reached Kansas City, she was feeling almost safe... until the handsomest man she'd ever seen entered the car and swept her into his embrace. She didn't know who he was or why he refused to let her go, but when she gazed into his eyes, she somehow knew she could trust him with her life... and her heart.

DESTINED ENCOUNTER
As soon as Zack Standish spotted the black-haired beauty in his freight car, he knew she was the one the police were searching for. But the innocence in her violet eyes intrigued him-he found it hard to believe she was a thief, though it was obvious she was running away from something... or someone. At first he grabbed her to keep her from escaping; then he held her close because she felt so wonderful in his arms. He yearned to kiss her cares away, to make her tremble with desire, not fear... to free her from the torment of
DECEPTION'S EMBRACE
Reviews from Goodreads.com