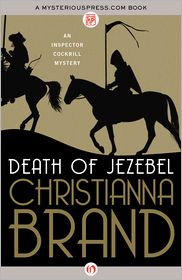 At a medieval pageant, Inspector Cockrill investigates a dramatic death. Ever since she drove her best friend's fiance to kill himself, Isabel Drew has been nicknamed Jezebel. She is domineering, arrogant, vain -- and beautiful enough to get away with it. She is starring as a princess in a medieval pageant when her past catches up to her. On tiny slips of paper, threats appear, promising death to Isabel and those around her. Fearing she may be attacked, she invites the brilliant Inspector Cockrill to keep her safe after the performance. But her precautions come too late. During the first show, Isabel falls from her tower and is dead before she hits the ground. She was strangled, and the room she fell from was locked from the inside -- a crime too daring to be possible. But Inspector Cockrill saw it all, and unraveling the impossible is his specialty.
Reviews from Goodreads.com