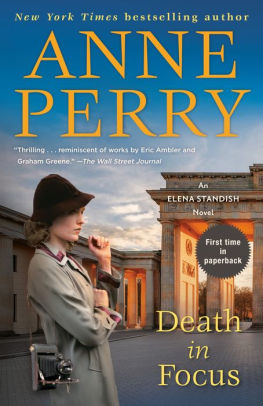 In the start of an all-new mystery series set in pre-World War II Europe, an intrepid young photographer carries her dead lover's final, world-shattering message into the heart of Berlin as Hitler ascends to power.

On vacation from London on the beautiful Italian coast, twenty-eight-year-old Elena Standish and her older sister, Margot, have finally been able to move on from the lasting trauma of the Great War, in which the newly married Margot lost her husband and the sisters their beloved brother. Touring with her camera in hand, Elena has found new inspiration in the striking Italian landscape, and she's met an equally striking man named Ian. When Ian has to leave unexpectedly, Elena -- usually the more practical of the sisters -- finds she's not ready to part from him, and the two share a spontaneous train trip home to England. But a shocking sequence of events disrupts their itinerary, forcing Elena to personally deliver a message to Berlin on Ian's behalf, one that could change the fate of Europe.

Back home, Elena's diplomat father and her secretive grandfather -- once head of MI6, unbeknownst to his family -- are involved in their own international machinations. Worried when Elena still hasn't returned from Italy, her grandfather starts to connect the dots between her change in plans and an incident in Berlin, where Adolf Hitler and the Third Reich are on the rise. It seems the message Elena delivered has forced her into a dangerous predicament, and her grandfather's old contacts from MI6 may be the only people who can get her out alive -- if Elena can tell the difference between her allies and her enemies.

New York Times bestselling author Anne Perry merges family secrets with suspense on the world stage, as darkness bubbles under the surface of a Europe on the brink of change. In these complicated times, Elena emerges as a strong new heroine who learns quickly that when nothing is certain, she can rely only on herself.
Reviews from Goodreads.com

Anne Perry has started a new series. This one features a plucky twenty-something photographer by the name of Elena Standish. It is set in Europe and the UK and this book takes place in 1933. One war is barely over, and Europe is under the threat of another one starting again. It's a dangerous time, especially in Germany in 1933. Hitler's popularity is high in Germany because he has promised jobs and better times for Germans. A lot of his agenda has not been revealed as of yet. Elena is visiting Amalfi with her sister. She has been hired to take photographs at an economist conference. She meets a young man and starts out on an adventure with him on her way back home to England. When Ian gets killed on a train to Paris, before he dies, he asks Elena to finish his mission which takes her to Berlin. There is danger around every corner in Berlin, and Elena does not who to trust. After a dangerous cat and mouse game in Berlin she finally finds herself on her way home, but danger follows her everywhere. This is a very difierent series for Anne Perry. I have read everything she's written and this new series and this protagonist surprised me a bit. But the book has a remarkably tense plot and it carries on right until the last page. I look forward to reading more about Elena. I'm never disappointed with Anne Perry.