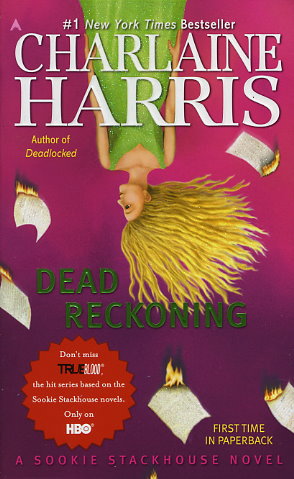 With her knack for being in trouble's way, Sookie Stackhouse witnesses the firebombing of Merlotte's, the bar where she works. Since Sam Merlotte is now known to be two-natured, suspicion falls immediately on the anti-shifters in the area. Sookie suspects otherwise, but her attention is divided when she realizes that her lover, Eric Northman, and his "child" Pam are plotting to kill the vampire who is now their master. Gradually, Sookie is drawn into the plot -- which is much more complicated than she knows. Caught up once again in the politics of the vampire world, Sookie will learn that she is as much of a pawn as any ordinary human -- and that there is a new queen on the board....
Reviews from Goodreads.com

Dead Reckoning is the eleventh full-length novel in the Sookie Stackhouse series by popular American author, Charlaine Harris. Sookie decides to clean out her attic, and that uncovers something both exciting and disturbing. Both Eric and Sam are noticing the effects of competition in the form of a roadhouse and a Vampire club opened by Victor Madden, new regent of Louisiana. A Molotov cocktail, a quartet of thugs high on Vampire blood and a crazy gun-wielding attacker don’t help business at Merlottes.

Sookie learns quite a bit about her fae history, is unhappy that Eric seems to be keeping a big secret from her, and wonders why the fae left on this side of the faery portal are gathering at the Hooligans club. Sookie has quite a few houseguests, who get their marching orders when they interfere just a bit too much in her life; she finds herself naked under a house with a vampire and finds a naked were in her bed. A body is disposed of in a rather novel manner.

Sookie hosts a baby shower and learns the source of her telepathy; she takes part in an assassination and realises her dismay at how much the vampires enjoy the killing. This instalment has plenty of action and intrigue and quite a few unresolved issues for the next book in the series, Deadlocked.