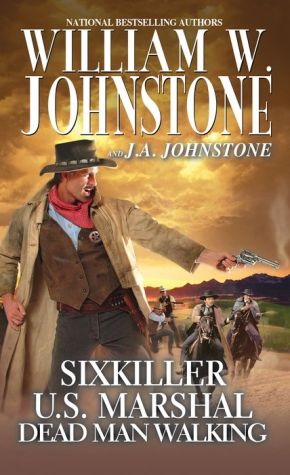 Bestselling William W. Johnstone introduces a hero unlike any other on the frontier: a man carrying a badge of the U.S. Government and the heritage of his Cherokee People -- John Henry Sixkiller, manhunter.

Ignatius O'Reilly is famous for his beautifully crafted counterfeit money. John Henry Sixkiller is famous for hunting criminals into the most violent and dangerous worlds most lawman dare not go. Now, the Deputy U.S. Marshal is zeroing on O'Reilly in San Francisco, when the case blows up in his face. Instead of O'Reilly, Sixkiller finds a beautiful woman and a meddling Federal agent from the Secret Service. O'Reilly gets away and the hunt leads Sixkiller after the woman, the counterfeiter, and the Fed into the rugged Sierra Nevada Mountains. There, a mining town is surrounded by armed men, people inside are dying of disease, and, as outlaws converge, the line between right and wrong disappears . . . until Sixkiller takes out a gun and lays down the law -- one bullet at a time.
Reviews from Goodreads.com