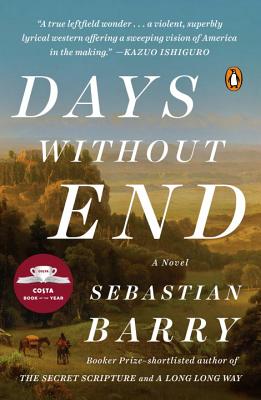 Thomas McNulty, aged barely seventeen and having fled the Great Famine in Ireland, signs up for the U.S. Army in the 1850s. With his brother in arms, John Cole, Thomas goes on to fight in the Indian Wars -- against the Sioux and the Yurok -- and, ultimately, the Civil War. Orphans of terrible hardships themselves, the men find these days to be vivid and alive, despite the horrors they see and are complicit in.

Moving from the plains of Wyoming to Tennessee, Sebastian Barry's latest work is a masterpiece of atmosphere and language. An intensely poignant story of two men and the makeshift family they create with a young Sioux girl, Winona, Days Without End is a fresh and haunting portrait of the most fateful years in American history and is a novel never to be forgotten.
Reviews from Goodreads.com

4.5★s
“The mind is a wild liar and I don’t trust much in it that I find there. To tell a story I have to trust it but I can issue a warning like a ticket master issuing a ticket for a western-bound train that will be obliged to go through wilderness, Indians, outlaws and storms.”

Days Without End is the seventh novel by award-winning Irish author, Sebastian Barry. In his later years, Thomas McNulty thinks back to his youth: he skims over the awful experience of sailing to Canada and barely surviving, and jumps straight into the first time he met Handsome John Cole (“my beau”) under a Missouri hedge during a rain storm. From that moment on, everything happens in tandem.

In Daggsville, as youthful teens, they don dresses to dance with miners, until they grow too tall. In the army, they ride west to deal with an Indian problem in California, finding themselves in the middle of a massacre of women and children. The parallel between the Irish, the Indians and the African Americans is quickly clear to them: “It’s a dark thing when the world sets no value on you or your kin, and then Death comes stalking in, in his bloody boots.”

A trek across the prairies that involves hunger: “There was no game below the mountains this time and soon our bellies were gnawed by hunger. It was weeks of a journey and now we were a-feared of what hunger might do. A hunger-knower like myself was a-feared more than most. I seen the cold deeds of hunger.”

Also experienced are a flash flood, frostbite, a firing squad, heatstroke, many encounters, good and bad, with Indians and, ultimately, a treaty. Friendships are forged, though not with all: “No one could prize a man with a tongue like a bolus of knives.”

And if they see the worst of humanity then: “Desolate and decimated though we were, there was something good there. Something that couldn’t be extinguished by flood and hunger. The human will. You got to give homage to it. I seen it many times. It ain’t so rare. But it is the best of us.”

From Indian wars to the Civil War via an interlude on the stage in drag in Grand Rapids with the orphaned Indian girl they have brought home. While the graphically described battle scenes definitely illustrate the unglamorous side of war, they do become a tiny bit tedious. Surrender, captivity and finally release are not the end of the drama, even after they settle on a Tennessee tobacco farm. More than once, getting into women’s clothing proves to be a saviour…

The punctuation and grammar (or lack thereof) give authenticity to the voice of this mid-19th Century uneducated Irish immigrant. But Barry is such a skilled author that, despite this, he often makes Thomas McNulty’s prose sing: “Then the rains came walking over the land, exciting the new grasses, thundering down, hammering like fearsome bullets, making the shards and dusts of the earth dance a violent jig. Making the grass seeds drunk with ambition” and “It was so silent you could swear the moon is listening. The owls are listening and the wolves.” Characteristic of Sebastian Barry’s work, this is a moving and powerful read.