Dark Side of the Morgue — Raymond Benson 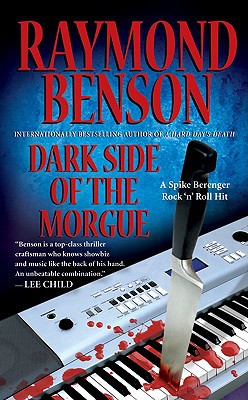 Musicians in progressive rock bands in Chicago are being murdered--one by one. The local police have no clues, but several of the musicians who fear they're next on the hit list claim that the killer is a ghost from the past--a woman who was reported missing and presumed dead for over thirty years!

The Rockin' Security team is called into action. Spike and his partner, Suzanne Prescott, travel to Chicago to investigate the case, only to find that no one wants to talk. As Spike digs deeper, he begins to unearth a lode of deadly secrets involving sex, psychedelic drugs, and, of course, rock 'n' roll. And it isn't long before the private detective becomes a pawn in a very dangerous game.
Reviews from Goodreads.com