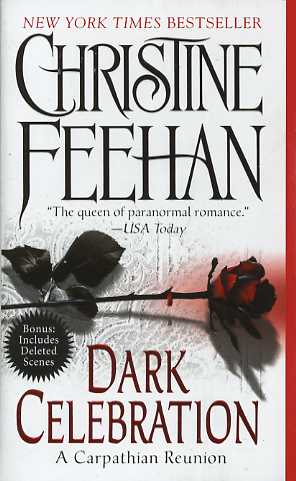 With her erotically charged Carpathian tales, Christine Feehan has enthralled a legion of fans, captivated by a seductive world and the unforgettable characters--both human and not--who inhabit it. Now, she reunites all of them in a Dark Celebration...

After centuries as the prince of the Carpathians, Mikhail Dubrinsky fears he can't protect his people for long from their greatest threat: the extinction of their species at the hands of their immortal enemies--who are devising a scheme to slaughter Carpathian females. But even with his own lifemate, Raven, and their daughter, Savannah, vulnerable to the encroaching evil, Mikhail's hope is not lost.

Carpathians from around the world are gathering to join their souls and their powers to bring light to the darkness. But so too are their adversaries uniting--hunters, vampires, demons and betrayers--bringing untold dangers into the fold of the Carpathian people.
Reviews from Goodreads.com

Two new romances (or more correctly, lifemates), everyome together, danger, and laughter. This book really brings together all the Carpathians and letting them interact with one another. It also continues some of their stories, which made it fun to go back to those characters. Seeing them all banding together especially with their lifemates is a real thrill. Most of all this book is just HILARIOUS! Feehan manages to instill excitement, danger, wonder, love, and comedy all into one book. What started out as a sad ending to a good race turned into just the beginning and hope of the Carpathians. My only regret is that some of the Dark ones hadn't found their lifemates yet and that Ivory was unknown to them. But I guess that added to the interest of the novel. And beware the Carpathian women can KICK BUTT, as shown by Natalya (who is awesome, although I found her annoying in Dark Slayer, but thats probably because I hadnt read this one or her story yet). Anywaays...Kudos for an awesome story that warmed my heart and made me fall into hysterical laughter. 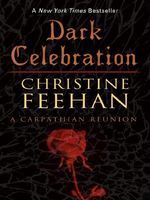