Danger in the Wind — Jane Finnis 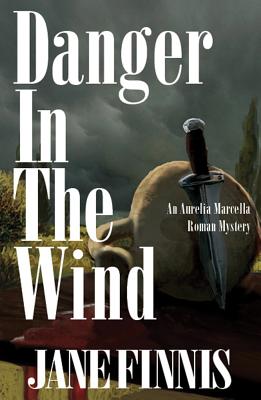 Share:
A fine summer in 100 AD and good government under Trajan Caesar promise well for the Roman settlers in the frontier province of Britannia.

Aurelia Marcella runs a mansio on a busy road to York. June is always busy, but one day two unusual events occur: a soldier is murdered in his bed at the inn, and a letter arrives from Isurium, a small fort north of the city. It is from a cousin, Jovina, inviting Aurelia to a midsummer birthday party. But the missive also reads as a plea for help, referring to "danger in the wind."

The murdered soldier also bore a message, locked in Aurelia's strongbox, indicating violence would erupt at the very same fort on the day of the party.

At Isurium, Aurelia finds Jovina and her drunken husband and unruly children caught in a tangled web of greed, love, intrigue, and death. When violence engulfs the district, Aurelia suddenly finds herself in peril from enemies engaged in an anti- Roman plot and from family members bent on misguided or evil agendas of their own. This is the 4th in a series.