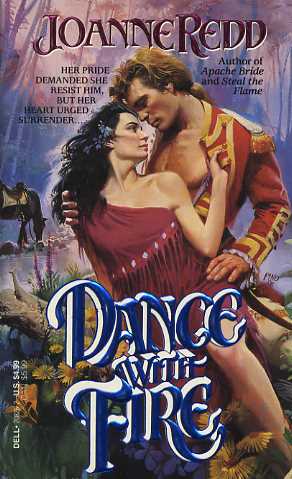 
PRINCESS OF FIERCE PASSIONS
Fire Dancer was Chickasaw to the depths of her soul. Her white mother had bequeathed her stunning green eyes, yet her blood was pure with unfettered Indian pride. Now her chieftain uncle had wounded her spirit by giving her to the red-coated officer as an interpreter--and bed- mate. Insulted to her core, she vowed never to touch this arrogant Englishman, never to stroke his tawny, hard-muscled flesh, never to hunger for his embrace.

SOLDIER OF SECRET DESIRES
Major Evan Trevor was as dazzled by the regal Chickasaw princess as he had been by the vast forests, wide rivers, and rich bounty of this wild virgin land. He was told Fire Dancer was his for the taking, but from first sight he wanted more than just her delectable body. Not by force, but with tender kisses, he planned to make her ache for him, to call out his name in ecstasy, and to surrender her rebellious heart... until his destiny became her own.