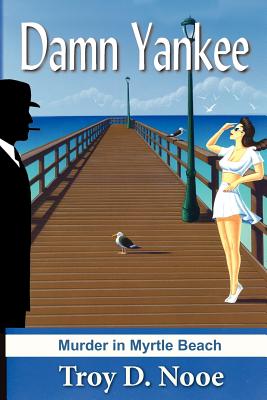 
The Ocean Forest, first in the series was a finalist in the 2012 Shamus Awards. Frankie McKeller is back on the beach, this time as the new House Detective of The Ocean Forest Hotel. When he is asked to look into the disappearance of a young girl, he is thrown into an underworld of bootleggers, illegal gambling and vice. When another girl turns up dead, Frankie’s limited skills are put to the ultimate test. It’s murder and mayhem in the sand as Frankie contends with the other side of life in Myrtle Beach and a taboo romance that can never be. Praise for The Ocean Forest, first in the series. “Tough, determined, annoying, but effective, Frankie probes until he touches a nerve and somebody slugs him. His technique lacks class, but when he uncovers a web of crime and cronies as sordid as any up North, he will remind you of Bogart … Recommended for those who like fast-moving mystery with a minimum of blood and a lively postwar atmosphere.” —Jeanne Greene, Historical Novel Review “Riveting work of thriller and mystery, ... very much recommended.” —Berine Nelson, Midwest Book Review “Quite the page-turner. The Ocean Forest hotel was definitely the inspiration and …the perfect backdrop for a mystery and … our local history. I’m not a fan of Frankie McKeller as a person (but), I’m looking forward to his next adventure.” —Caroline Evans, The Sun News “Nooe’s touch is deft and sympathetic as he invites us into McKeller’s brain for a wild, occasionally brutal ride.” – schuyler kaufman, CML Magazine