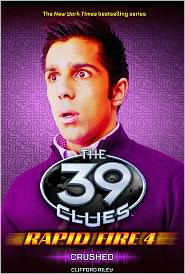 Share:
Ian Kabra has an embarrassing secret. It's not that he once accidentally ate at Burger King. It's not that he still has his childhood teddy bear, Mr. Buttons. It's that he can't stop thinking about a certain grubby American orphan. But just when he's about to take action, a dangerous person from his past stages a dramatic midnight break-in, forcing Ian to accept that there's something worse than an embarrassing crush---a secret that won't stay buried.