Crispin: The Cross of Lead — Avi 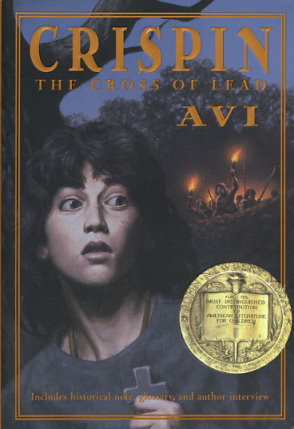 "Asta's son" is all he's ever been called. The lack of name is appropriate, because he and his mother are but poor peasants in fourteenth-century medieval England. But this thirteen-year-old boy who thought he had little to lose soon finds himself with even less -- no home, family, or possessions. Accused of a crime he didn't commit, he has been declared a "wolf's head." That means he may be killed on sight, by anyone. If he wishes to remain alive, he must flee his tiny village. All the boy takes with him is a newly revealed name -- Crispin -- and his mother's cross of lead.

His journey through the English countryside is puzzling, amazing, and terrifying. Especially difficult is his encounter with the juggler named Bear. A huge, and possibly even mad, man, Bear forces the boy to become his servant. Bear, however, is a strange master, for he encourages Crispin to think for himself.

Though Bear promises to protect Crispin, it becomes clear that the boy is being relentlessly pursued. Why are his enemies so determined to kill him? Crispin is gradually drawn right into his enemies' fortress, where -- in a riveting climax -- he must become a different person if he is to save Bear's life and his own.