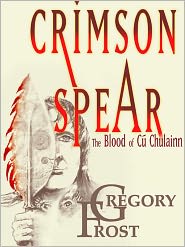 So warns the faery seer of Cruachan. It is a warning no one will heed, because only on thing stands between the army of Maeve the Intoxicator and its goal: a small young warrior named Setanta. Maeve, with all her cunning, sees no problem in dispatching him.

But Setanta is no normal defender. His father is a god, who has given him a monstrous power and a magical spear. Alone against all odds and all comers, he fights as strange a war as was ever undertaken - in the narrows of every stream the army must cross.

But beware, Setanta. The faery's warning is for you, too. Defeating the lustful Maeve may have unexpected, lethal consequences.

"Crimson Spear: The Blood of CÚ Chulainn "comprises two previously published novels --" Tain" and "Remscela." The two books derive from the Ulster Cycle of Celtic mythology, known also as the "Tá in Bó Cuailnge "(tahn bo koo al' nyah). It is the story of a cattle raid upon Ulster Provinceperpetrated by the royal couple of Connacht, its neighbor, and defense of the province by its semi-divine hero CÚ Chulainn.