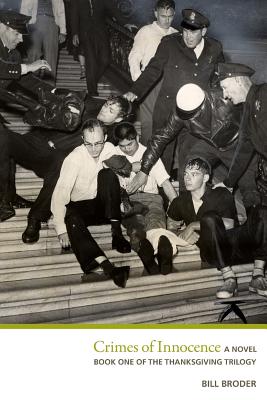 A Half Century of Public and Private Moral Ambivalence "The Thanksgiving Trilogy," by Bill Broder, presents a portrait of the human and historical dilemmas in our country during the last fifty years. In three novels, Bill Broder follows a group of friends who left their blood families in the East and formed close relationships in the San Francisco Bay Area-a family formed in exile. The annual reunion of this "family" takes place at Thanksgiving dinners. The three books, each complete in itself, explore significant aspects of California: a vision of possibilities, a sense of exile and mobility, and a respect for the past-aspects that have contributed greatly to the development of American culture as a whole. "Crimes of Innocence," Book One of The Thanksgiving Trilogy, chronicles the dizzying plunge of a decent man, Jeremy Finch, into the earliest battles that helped define the protest movement of the 1960's. The movement coalesces in 1959 over three causes: the hearings of House Un-American Activities Committee, nuclear bomb testing, and the scheduled execution of Caryl Chessman. The novel explores the elusive boundary between "criminal" behavior and "moral" behavior. In the course of the novel, the family founds the Califia Institute, a think tank embracing the spectrum of American politics from "ideal-politic" to "real-politic." Praise for Bill Broder's works: "The Sacred Hoop" is a wise and eloquent book, outlining through story the tragedy and triumph of human evolution. -Edward Abbey In "The Sacred Hoop"] Bill Broder...is a master storyteller, whose graceful prose is so engrossing that readers will find themselves instantly absorbed in what is sure to become a classic." -Pat Holt, The San Francisco Examiner and Chronicle In "Taking Care of Cleo..".Broder combines a storyteller's delight in complicated predicaments with a painter's eye for landscape and body language and a poet's sense of place." -Donna Seaman, Chicago Tribune In "A Prayer for the Departed"] Broder's careful, eloquent meditations upon family life transform this account from a mere history or memoir to a celebration of, and tribute to, family life. . . .The book's glance at history as a moving force and its examination of each decade allow readers to realize and experience history and the past. Broder not only shares his life and journey with readers, but allows them to touch and feel it. A tender, inquisitive book that will appeal to those from old and new worlds. --Kirkus Indy Review
Reviews from Goodreads.com