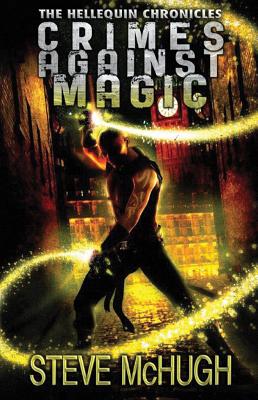 It's been almost ten years since Nathan Garrett woke on a cold warehouse floor with nothing but a gun, a sword, and no idea of who he was or how he got there. His only clue, a piece of paper with his name on it. Since then, he's discovered he's a powerful sorcerer and has used his abilities to work as a thief for hire. But he's never stopped hunting for his true identity, and those who erased his memory have never stopped hunting for him. When the barrier holding his past captive begins to crumble, Nathan swears to protect a young girl who is key to his enemy's plans. But with his enemies closing in, and everyone he cares about becoming a target for their wrath, Nathan is forced to choose between the life he's built for himself and the one buried deep inside him. Crimes Against Magic is an Urban Fantasy set in modern day London with Historical flashbacks to early fifteenth century France. It's the first in a series of books called the Hellequin Chronicles, which shows the life of sorcerer Nathan (Nate) Garrett.
Reviews from Goodreads.com