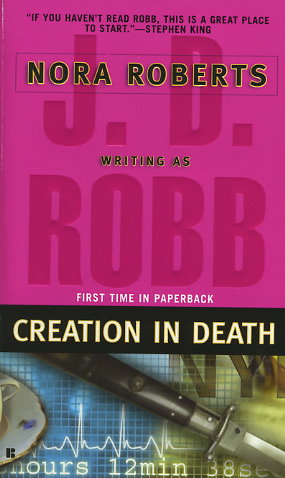 Share:
NYPSD Lieutenant Eve Dallas keeps the streets of a near-future New York City safe in this extraordinary series. But even she makes mistakes, and is haunted by those she couldn't save-and the killers she couldn't capture.

When the body of a young brunette is found in East River Park, Eve has seen this crime scene before: the artfully arranged body of a young brunette, arms spread, palms up, body marked by the signs of prolonged and painful torture. Carved into her torso is the time it took her to die - in hours, minutes, and seconds. And on the third finger of her left hand has been placed a silver ring.

Eve is catapulted back to a case nine years earlier, when a man whom the media tagged “The Groom”, because he put silver rings on his victims' fingers. The city had been on edge due to a killing spree that took the lives of four women in fifteen days. Eve and her partner Ryan Feeney, her friend and mentor, couldn't stop him before he disappeared, only to resurface in other parts of the world to kill and kill again. But now The Groom seems to have come back to where he started.

But his sights are set on the biggest challenge of his illustrious career - an abduction that will test his skills and that promises to give him satisfaction as he's never known. Time is running out on another woman's life... and for Eve.