Cowboy of Mine — Red L. Jameson 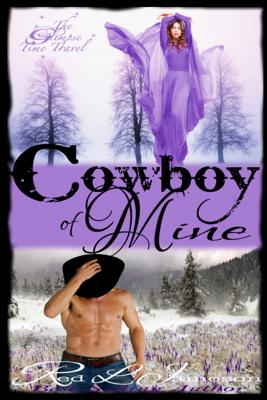 Book Three of the Glimpse Time Travel Series The matchmaking, time-traveling muses have a huge problem. An angry Norse god has just captured one of their mortals, refusing to tell them where he took Jacob Cameron, let alone when. As a seventeenth-century Highlander, being shuttled through time by a man calling himself Odin, might have been enough to crack Jake Cameron’s sanity. He’s kept his mind only through grit, gumption, and the single goal to somehow return to 1653 and his brothers. Landing in the freezing wilds of Montana in 1887, becoming the sheriff for a small mining community, Jake now needs to make a plan to travel back in time. However, when a wee fae-like woman walks into his life all his best-laid intentions becomes hazy. As a thief and liar, Meredith Peabody knows she has no chance with the new sheriff in town. Although, he melts her frozen heart with his protection and smoldering looks. Even if she did have a chance with him, how could she ever relate she’s not from this time? She might never get the chance because as soon as she realizes her winter’s wish—for Jake to stay close—the criminal he’s hunting turns the tables on him. But there’s no way in h-e-double hockey sticks Meredith will let that happen. The muses have their work cut out for this glimpse—chasing after a god, trying to find clues where and when their humans could be, and fitting in time for dress shopping has been murder. Gods, hopefully not literally!
Reviews from Goodreads.com