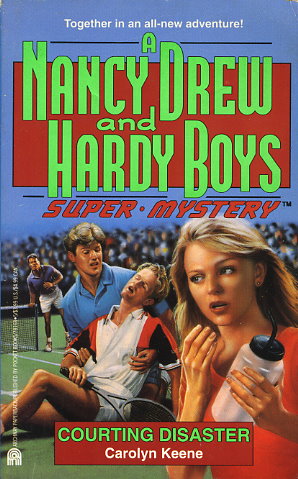 It's spring break, and the sparks are flying in Charleston, South Carolina. Terry Alford, a top television veejay, is starring in the hot new Broadway-bound rock musical Beauty and the Beat, and she's invited NANCY DREW backstage to catch her smash act. But southern hospitality takes a nasty turn when a masked intruder makes a startling, show-stopping entrance, throwing the production and Terry's life into dire jeopardy.

Meanwhile...
On an island resort just off the Carolina coast, THE HARDY BOYS are trying to keep tennis superstar and superbrat Pat Flynn out of harm's way. He's being stalked by an unknown assailant determined to knock him off the court for good. Nancy, Frank, and Joe soon discover that they're dealing with a matched set: Pat Flynn and Terry Alford are one of the hottest celebrity items around. They're looking for romance but finding danger...in COURTING DISASTER.
Reviews from Goodreads.com