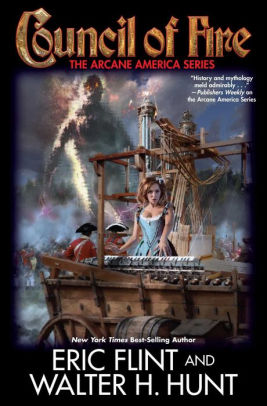 Halley's Comet, 1759. The comet veers and strikes the Earth with nature-altering force. The New World splits from the Old. A chain of mountains rises in the Mid-Atlantic. No ship from the New World can find a passage to the Old. Those who try . . . simply disappear.

But the greatest change the comet has wrought is the dawn of real magic -- and very real monsters. A kraken in the Atlantic, revenants in Jamaica, Dry Hands and Floating Heads in the Hudson Valley, African ogres and worse set loose in the streets of New York.

Plus, the political situation has utterly shifted. The powerful Iroquois Confederacy disintegrates. Seneca and Cayuga follow a nefarious shaman and war leader, while the Mohawks ally with the English. What's more, the English and the French in North America must contemplate what had been unthinkable: unification behind a young Englishman prince, now the only person of royal blood left in the New World. In this transformed land of magic, royal blood brings unexpected powers. Yet if Prince Edward cannot master those powers, they may lead to his own destruction -- and to a New World ruled by monsters.