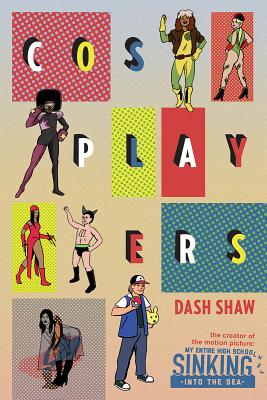 
From the writer / director of the acclaimed 2017 feature film My Entire High School is Sinking into the Sea, this expanded edition of the titular graphic novel now includes over 30 pages of new material, including the original story that inspired the movie! The film, which stars Reggie Watts, Lena Dunham, Maya Rudolph, Susan Sarandon, and Jason Schwartzman, delighted audiences at the 2016 Toronto and New York Film Festivals. This newly designed paperback includes the original short story that inspired the film, and the single issue comic book, A Cosplayers Christmas, which did not appear in the previous edition. Cosplayers is cartoonist Dash Shaw’s ode to that defining element of fandom, the “costume play” of so many anime and comic conventions. In it, Annie and Verti combine their love of cosplaying with their love of social media and film in order to deepen their relationship with the popular culture they celebrate. Cosplayers depicts their stories in an affectionately funny way, celebrating how much more inclusive and humanistic fandom can be than most of the stories and characters it is built upon. It features plenty easter eggs for fans of the broader culture as well as being the perfect entry point for those completely befuddled by it.
Full-color illustrations throughout.