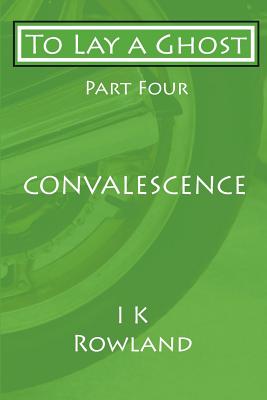 
In Part Four - Convalescence Stephen takes Chaz for a drive up into the hills, where they exchange further confidences and reveal some of their feelings for each other. These leave Stephen wondering even more about himself, which is compounded after a discussion about sharing expenses while Chas stays with Stephen, during which Chaz states they were effectively living together. Chaz's friends continue to visit while he stays with Stephen. Stephen becomes much more closely involved with them and eventually Rusty asks for Stephen's help with a computer problem at work. Stephen is able to oblige. A little later he is able to help Rusty again, this time immediately prior to a business journey Rusty is to undertake. A crisis develops when it becomes clear that both Rusty and David are close to exhaustion, although the reason is not immediately clear. Stephen and Chaz between them persuade the other two to reveal what is so worrying them. They are astonished to learn that David is to be transferred to work in Heckford and that Rusty's firm will be re-locating to a site closer to Heckford than Heckwyke. TV producer Craig then asks for Stephen's assistance to write some software for a new series his company has been commissioned to make. This involves Craig's chief editor, Darren, who visits Stephen's home and stays overnight. After a month of convalescence the plaster cast is removed from Chaz's injured leg, although the leg is not yet strong enough to mount the 42 stairs to Chaz's own flat. Stephen accompanies Chaz on a daily walking routine to strengthen the leg. While his leg was in plaster Chaz was not able to lift his leg high enough to sit on the pillion seat of Stephen's motorcycle. Not long after the removal of the plaster he is at last successful and Stephen takes him for a short run. Stephen's computer skills are called on again, this time by Callum Casey, the manager of the local motorcycle and car dealer. Chaz gives assistance when compiling test data for the resulting software. Shortly after Chaz is offered the position of workshop manager at Caseys, but decides he cannot accept because he believes the offer is in return for the favour Stephen has given to Caseys. Stephen manages to persuade Chaz that the offer has been based on Chaz's merit only and that he had had nothing to do with it. Stephen's awkward client once again asks for Stephen's services but Stephen is unwilling to undertake another assignment from him. Eventually but reluctantly he accedes to the request, but under his own strict terms for performance. During Chaz's stay in Stephen's home it becomes obvious to all the friends that Chaz has fallen deeply in love with Stephen. The friends are then surprised but delighted to see that Chaz's feelings are reciprocated by Stephen. Stephen himself, however, is frightened of the consequences if he should reveal his love to Chaz. Eventually, during a week-end visit to Heckwyke he manages to explain himself to Chaz, although even then he cannot actually declare his love in plain words. Stephen does finally manage to tell Chaz of his love, during the week in which Rusty has to journey south on business.