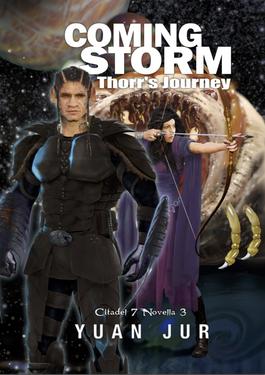 Share:
Tora is a level ten security world, closed to outside enquiry via normal channels. Superverse Central monitors key individuals affecting existence-evolution across every timeline. A time of crisis has arisen.
Scarzen warrior, Thorr of Hammer Forge becomes the centre of investigation. His life’s course is inextricably linked to a security breach concerning a closely guarded secret on his home world. Provoked into an unsanctioned duel that ends in him accused of dishonorable murder, Thorr’s father and clan leader Tralldon, offers him one chance for redemption. Thorr is ordered to set out immediately for Talon West Bunker and place his future in the hands of the mysterious head of security, Dorjaa. The course of that journey places Thorr in the path of those with murderous intent.
Behind the scenes, Central dispatches Citadel Warden Uniss to investigate. Thorr’s journey sets in motion events that ultimately affect the course of billions of lives across the superverse.