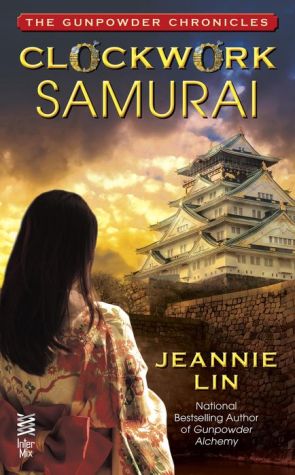 Share:
National bestselling author Jeannie Lin’s Gunpowder Chronicles continue as a woman left adrift by the fall of a Dynasty attempts to reclaim her family’s honor...

As a physician, Jin Soling can see that the Emperor is cracking, relying on Opium to drown his troubles. The Ch’ing Empire is failing, and war with the British is imminent, but the man to whom Soling was once engaged has a bold idea to save it.

A leader within the Ministry of Engineering, Chang-wei suggests an alliance with Japan, whose scientists claim to have technical advancements that could turn the tide of the war. But Japan has kept itself in isolation for the last two hundred years, cutting all diplomatic ties with the Ch'ing Empire. Chang-wei must enter the island nation in disguise to seek an alliance—an alliance forbidden by the Japanese shogunate.

Seeking to escape the politics of the imperial court, Soling arranges her own passage on the airship to Japan. But once they land, Chang-wei and Soling become targets of the shogunate's armored assassins. Caught between two empires, in a land distrustful of foreigners, the deadly war machines are the least of their worries...


Praise for Jeannie Lin and her novels