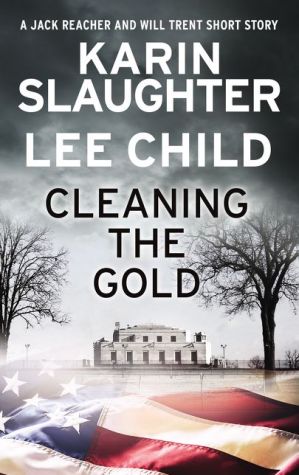 Will Trent is undercover at Fort Knox. His assignment: to investigate a twenty-two-year-old murder. His suspect's name: Jack Reacher.

Jack Reacher is in Fort Knox on his own mission: to bring down a dangerous criminal ring operating at the heart of America's military. Except now Will Trent is on the scene.

But there's a bigger conspiracy at play -- one that neither the special agent nor the ex-military cop could have anticipated. And the only option is for Jack Reacher and Will Trent to team up and play nicely. If they can…
Reviews from Goodreads.com

Cleaning the Gold is a short story by Lee Child and Karin Slaughter. What events might lead to these most bizarre of circumstances? Will Trent (under the alias of Jack Phineas Wolfe) and Jack Reacher are in the nation's Gold Vault in Fort Knox, Kentucky, dusting and stacking bars of gold.

Reacher is there to get some in-the-act evidence on an abusive army major/loan shark. He knows that Wolfe's not really this other guy's name, but he suspects he might be there for the same reason.

He's not. Will Trent is on the trail of a murder suspect from a twenty-two-year-old cold case in Georgia. And that suspect is Jack Reacher. He just needs some DNA....

It's easy to see that Slaughter and Child had a lot of fun putting this little piece together. Lots of twists, a bit of action and some fun between these two very different protagonists. A short but very entertaining dose of Jack Reacher and Will Trent.