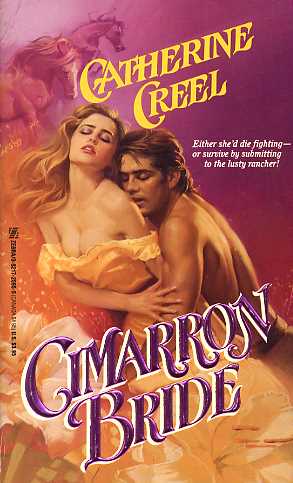 UNCIVILIZED AS A SAVAGE
Impulsive, spirited Jessie Clare had been looking for adventure when she journeyed to Cimarron, New Mexico. But the spunky schoolmarm got a lot more than she bargained for when marauding Apaches captured her--and would release her only to the man who claimed he owned her. The one thing that alarmed the beautiful innocent even more was when Cimarron rancher Ben Chandler showed up swearing he was her betrothed--and that he'd make her his woman in an Apache ceremony that very night! Terrified to be an
Indian slave, Jessie had no choice but to submit... and become a victim of the brash frontiersman's wicked, bold loving.

UNTAMED AS A WILDCAT
Virile widower Ben Chandler wanted nothing to do with troublemaking ladies, but when the town elected him to rescue the outpost's schoolmistress, he had to say yes. At the redskins' camp, he was shocked to discover Jessie would be freed only if he "married" her--and even more surprised to see how young and desirable she really was! His passions ruled his head, and Ben possessed the golden-haired gal every way imaginable. Between his unrestrained kisses and her ineffective struggles, the hot-blooded male taught the teacher the facts: Fight and end up a very dead and heavenly spirit, or obey and become his breathing, willing CIMAROON BRIDE
Reviews from Goodreads.com