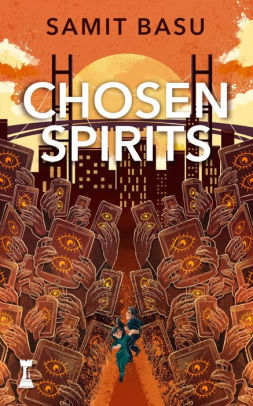 CHOSEN SPIRITS #1 Hot New Releases (Contemporary) India#1 Hot New Releases (Science Fiction) IndiaAmazon Bestseller (Contemporary, Science fiction) India  Brilliantly written, structurally inventive, completely immersive. – KJ Charles It brings Orwellian dystopia and satire closer home with click-bait headlines that you may have read last week, its vision of technological surveillance is as soul-chilling as it is brilliant; and the violence without being graphic is relentless on your peripheral vision; but it also gives you mostly incorruptible, frequently idealistic, incredibly soft-hearted people, it gives you the kindness of strangers, and it gives you the hope of resistance. – Scroll Chosen Spirits, set not far into the future is utterly persuasive in its construction, scathing in its cynicism and is laced with social commentary. –Open Magazine An odd balm for nerves: an anti-dystopian book… uncomfortably close to reality… uncannily prophetic - The Hindu It's less speculative fiction and more caustic investigation of the times we live in. Set in an India just a decade from now, Chosen Spirits is about a world where technology and religious bigotry combine with near-total corporate control over the lives and bodies of citizens… a novel of ideas. There are so many conversations, sharply observed mannerisms, tics. It reads like a sci-fi social satire, a comedy of manners. - Mint CHOSEN SPIRITS is an anti-dystopian near-future novel. She'd decided, that night, that she wouldn't leave. That she would stay in India, in Delhi, and belong as hard as she could. Joey is a Reality Controller, in charge of the livestream of a charismatic and problematic celebrity in smog-choked, water-short, ever-transforming Delhi - a city on the brink of revolution, under the shadow of multiple realities and catastrophes - at the end of the 2020s. When Joey impulsively rescues a childhood friend, Rudra, from his new-elite family and the comfortable, horrific life they have chosen for him, she sets into motion a chain of events — a company takeover, a sex scandal, a series of betrayals — that disintegrates not just their public and private selves, but the invisible walls that divide the city around them. To find the lives they need, Joey and Rudra must reckon with people and forces beyond their understanding, in a world where trust is impossible, popularity is conformity, and every wall has eyes. More responses: Chosen Spirits is not interested in being a flight of fantasy. The novel talks about issues that are critically important to us in present-day India and keeps reminding the reader that the past can't be buried, no matter how much anyone tries. - Dear Reader An instant classic that's realist-cyberpunk in its pitch-perfect projection of a present-day India constantly outrunning fictional dystopias - Indra Das. Enjoyed reading… A near-future India that is not dystopia, but a world of half-doubt, half-possibility. - Gautam Bhatia Funny, wry, harsh, a mirror and an alternate. - Tashan Mehta Even the things that feel radically different at first glance are, upon reflection, not so distant from us after all… Dissent and your rights will evaporate, ask too many questions and even your own family might 'unperson' you. - Firstpost
Reviews from Goodreads.com