THE FULL STORY BEHIND THE BORGIAS, NOW A MAJOR TV DRAMA STARRING JEREMY IRONS
'Either Caesar or nothing' was the motto of Cesare Borgia, whose name has long been synonymous with evil. Almost five centuries have passed since his death, yet his reputation still casts a sinister shadow. He stands accused of treachery, cruelty, rape, incest and, especially, murder - assassination by poison, the deadly white powder concealed in the jewelled ring, or by the midnight band of bravos lurking in the alleys of Renaissance Rome.
This classic book by acclaimed historian and biographer Sarah Bradford (author of Lucrezia Borgia and Diana), is the drama of a man of exceptional gifts and a driving lust for power. Cesare Borgia dared fortune for the highest goals and when fate turned against him he fell like Lucifer. Set against the brilliant backcloth of High Renaissance Italy, his life had the perfect proportions of a Greek tragedy.
Reviews from Goodreads.com 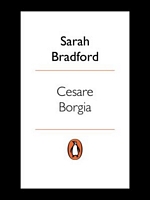