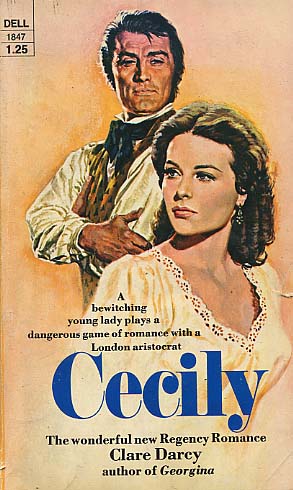 LADY IN THE LIMELIGHT

The dashing young bloods of London gasped at their first glimpse of Cecily on the stage. Who was this adorable creature? Could she be as innocent as she seemed? Or was she just another adventuress, using her ravishing looks and dimpled smile to rise in the world?

No one asked these questions with more concern than the Honorable Robert Ranleigh, the handsome, aristocratic leader of London male society. For Cecily actually claimed to be his distant relative, and begged him to come to her aid. Ranleigh had never been bested by any man, or discomfited by any woman -but Cecily had much to teach him about the unpredictable ways of a young lady in love, and about the unsuspected weak spot in the fashionably cynical armor with which Ranleigh thought to protect his heart....
--------------------------
UK Edition

When the Honourable Robert Renleigh wagered that he could make the acquaintance of the newest adornment of the London stage, he did not expect her to prove to be a distant cousin, seeking his aid in obtaining a post as a governess. But since 'Miss Dangerfield-Nelson' could not be permitted to continue to risk her reputation, and the family's, Mr Ranleigh agreed to establish her respectably.

However, a number of young gentlemen of the 'ton' had other ideas for Cecily's future, and to Mr Ranleigh's surprise, so had he.