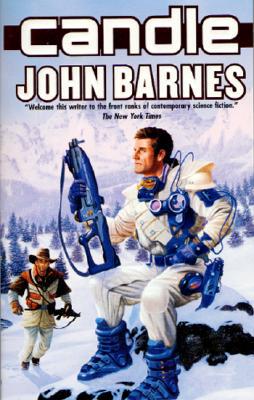 
Currie Culver is about fifty-five years old, in good health, living in a comfortable retirement in the Rockies with his wife. In the wake of the Meme Wars that swept the planet two generations before, Currie, his wife, and almost everyone on Earth have in their minds a copy of One True, software that grants its hosts limited telepathy and instills a kind of general cooperation.

In his younger days, Currie hunted "comboys"--people who had unplugged from the global net in order to evade One True, and who hid in wilderness areas, surviving by raiding the outposts of civilization. Now Currie is called back into service to capture the last comboy still at large, a man who calls himself Lobo. With his high tech equipment, thoroughly plugged into the global net, Currie sets out to bring Lobo in.

Instead, Lobo captures Currie, and manages to deprogram him. Thrown back on the resources of his own intelligence, courage, and wisdom for the first time in twenty-five years, Currie finds himself in a battle of minds with his captor . . . with results that will change the lives of everyone on Earth.

In the best tradition of John W. Campbell and Robert A. Heinlein, Candle is a novel about individualism and society that will leave readers breathless, arguing, and demanding more.