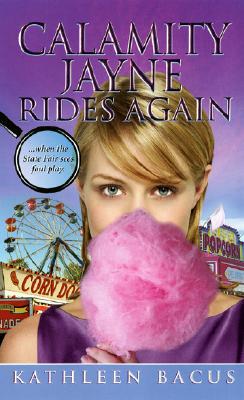 Two months ago, 23-year-old Tressa Jayne Turner knew just where she stood with "Ranger Rick" Townsend. Sure, her older brother's friend is what you'd call hott with two t's, but he's also responsible for her nickname "Calamity," and their sparring since high school makes the Hatfields and McCoys look like kissing cousins. And ever since they solved that murder last summer--ever since Rick saved her cookies, he's acted as if he has a god-given right to sample them.
Of course, Tressa has bigger frenches to fry. The Iowa State Fair is about to start; and as well as being her favorite time of the year--donuts, funnel cakes, cotton candy, turkey legs!--it's also her uncle Frank's busiest. His ice cream stand is in a prime location, and he's poised to scoop the competition. So when a soft-serve saboteur appears at the same time her cousin goes missing, it's another fine sticky mess--worse than a King Kone with a hole. It's time for Tressa to don her hot pink cowboy boots and solve the mystery. It'll be a heckuva wild ride. But will a certain ranger ride shotgun?
Reviews from Goodreads.com