Calamity Jayne and the Trouble with Tandems — Kathleen Bacus 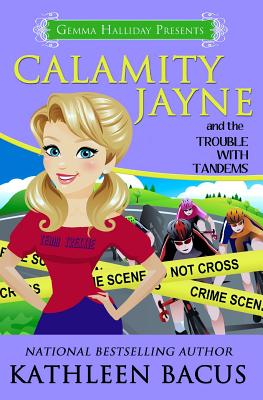 What's the hardest part of learning to ride a tandem? The pavement. It's late July, and Tressa Jayne Turner's summer is as sizzling as Ranger Rick Townsend! But is Tressa in love or lust with the hot ranger? There's not time to find out as Tressa's boss at the Gazette, Stan Rodgers, wants his Ace Cub Reporter to cover TribRide—the state's ginormous bicycle ride across the state—but not from the sidelines. This assignment is a little more...hands on. Hands on the handlebars, that is. Not only that, but Tressa's ticket to ride is on a bicycle built for two! And at the tandem's helm? Sleazy rival reporter Drew Van Vleet, aka, "the missing link." Could things get any worse? You decide. Tressa's parents are on the outs. Her sister is on the warpath. Van Vleet's insisting on a Star Trek theme. And Tressa is the number one suspect in a series of SO-not-funny pranks targeting reality TV star Keelie Keller. Talk about strange new worlds! Tressa is about to go where no "Calamity" has gone before—and where the ultimate wedgie is bound to be the least of this uneasy rider's worries! Hang on, folks. It's gonna be a bumpy ride. (I am a Vulcan. I feel no pain.)
Reviews from Goodreads.com