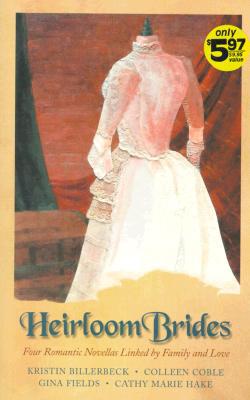 Share:
A Wedding Date Is Set, But Is Love in the Bargain?

Across history marriage has often been used as a means to gain money, social status, and security, as well as basic companionship, domesticity, and family. Vows could be said out of convenience or coercion, but could love really come in the bargain?

In this exclusive collection of nine historical romances, readers will discover the true conquering power of love.

Joie De Vivre by Lynette Sowell -- Edouard LeBlanc's Cajun parents have chosen Josée Broussard to be his wife, but a battle scarred soldier is not what the young woman dreamt of for a husband. Can they both let go of life's disappointments to see the treasure God has handed them?

Button Strong Bride by Cathy Marie Hake -- Suddenly orphaned along the Oregon Trail, Charity Davis is ordered to combine wagons with widowed father Ethan Cole. Only as a team can they hope to finish the journey. But can a rich young woman and a poor carpenter fall into step and become equally yoked?

The Wedding Wagon by Cathy Marie Hake -- Falling in love through letters, Bethany Handley agrees to meet and marry Joshua Rogers in Independence, Missouri, and accompany him across the Oregon Trail. But can the young couple discard old expectations that weigh them down and find simple joys to share?

From Halter to Altar by Cathy Marie Hake -- When James Collingswood of Dakota Territory sent an order back East for multiple horse bridles, somehow he receives the four Craig sisters instead, who are expecting to be mail-order brides. Can he get these women hitched without being lassoed himself?

From Carriage to Marriage by Janelle Burnham Schneider -- Shy, pregnant, and recently widowed, Corrine Craig followed her sisters west to start a new life as a mail-order bride. Rancher Luke Collingswood is interested in marrying the young widow, but is she too lost in her grief to see his gentle side?

From Pride to Bride by JoAnne A. Grote -- Without an immediate prospect for marriage, Bess Craig decides to make over the town of Lickwind by establishing a church, reforming the brothel women, and straightening up the saloon keeper, Gideon Rikers. But will her interfering be too much for any man to handle?

From Alarming to Charming by Pamela Kaye Tracy -- Tomboy Bertie Craig never bothered with feminine wiles until she becomes the last mail-order bride to find a husband and decides to attract the attention of Thomas Hardin. But with new wealth and a checkered past, will Thomas bring Bertie more trouble than she bargained for?

A Vow Unbroken by Amy Rognlie -- Vowing to never love again, Abby Cantrell travels to Colorado to marry a stranger in name only. But she failed to let her fiancé know that she was recently widowed and now with child. With such a rocky start, will she learn to love again?

Finishing Touches by Kelly Eileen Hake -- Riverboat captain Gregory Royce built a beautiful new house for his bride, but then Libby Collier's sister jilts the groom. Their father needs the marriage to secure his finances and calls upon Libby to keep the marriage bargain. But can she fill the void in Captain Royce's broken heart?