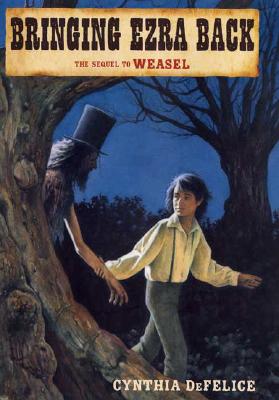 September 1840 marks five months since twelve-year-old Nathan Fowler's life-threatening encounter with Weasel, the heartless man who stalked Nathan like a wild animal through the forest. Nathan hasn't been the same since, wary of every new person he meets – including the visiting peddler Orrin Beckwith. When Beckwith shows Nate and his family a handbill advertising a show with a "white Injun," a man without a tongue, Nathan is sure the man is his friend Ezra, who lost his tongue to Weasel's knife. Determined to save Ezra from this traveling show of "human oddities," Nathan sets out with Beckwith from Ohio to Pennsylvania. On the way, Nathan encounters more people than he's ever met before, and he begins to learn a thing or two about human nature. The biggest shock, however, is Ezra himself, and it will take more than Nathan bargained for to bring him back home.
This long-anticipated sequel to Weasel is a masterful adventure story, in which Nathan Fowler triumphs over the legacy of fear left him by the villain Weasel.
Bringing Ezra Back is a 2007 Bank Street - Best Children's Book of the Year.
Reviews from Goodreads.com