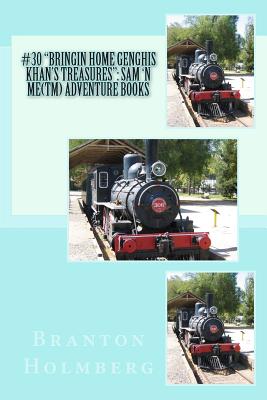 Sam 'n me, Big Mike, Marie and John are headed back to get Genghis Khan's treasures out to where they'd do some good fer a lot of folks needin help. They sure weren't doin anybody any good sittin in that tomb of his. There were treasures from seventy seven kingdoms the Great Khan had conquered, plus the treasure of his own kingdom which was the biggest one of all. The trick was to get them back to Xanadu and then to Santa Fe. With the help of the Prefect and the people of Xanadu, there were thousands Chinese men movin the treasure. The trouble was we had hoards of Mongol warriors determined to get the treasures fer themselves. Then we're set upon by hundreds of Chinese bandits ever bit as determined to get the treasures as the Mongols. That wasn't the end of things by any means, once we set sail for San Francisco we had Chinese pirates comin at us from behind and in front both. They fooled us with a pincer claw move. We had those followin us handled, but the ones attackin from the front had Long John's fleet in real peril.
Reviews from Goodreads.com