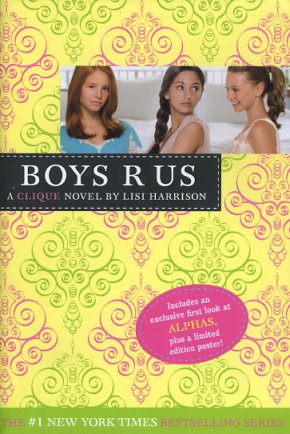 Massie Block: After disbanding the Pretty Committee, Massif' charge like Visa, forming OCD's hawtest clique yet: Massie and Crew. Even though money can't buy love, it can buy new friends ... or at least model-actresses who will act like your besties until
real ones. Lights, camera, MACtion!

Alicia Rivera: Hearts her new role as alpha of the Soul-M8s, BOCP. first ever boy-girl clique. But when the boys head back to the r renovated Briarwood Academy, will the remaining Soul-M8s become 4Squares?

Dylan Marvil: Is happy times ten to finally have a crush who's crushing back, especially since they luh-v all the same things: marshmallow lip-kissing, and chugging Red Bull. Buuuuuuuuurrrrrrrp!

Kristen Gregory: Scored three goals on the soccer field last week -- and Massie's crush . . . which earned her an ejection from her ex-BFF's heart. Can Massie forgive and forget, or is Kristen out of the game forever?

Claire Lyons: Has declared herself neutral in the battle of the cliques. But dividing her time among Massie, the Soul-M8s, and Cam has left her stretched thinner than extra-small Spanx. Can she get her friend to reunite, or will she be forced to pick a side once and for all?

The Clique ... the only thing harder than getting in is staying in.