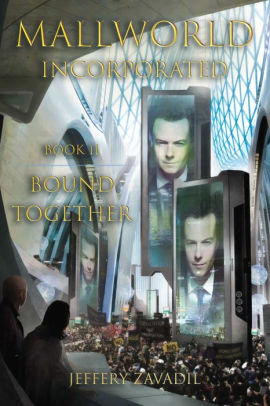 Share:
After winning Mallworld's first democratic election, Jime, Sam, and ReBound battle Executive propaganda in the media and crackdowns in the streets. Discontent seethes in the sprawling, dystopian shopping complex, which has oppressed humanity since the eco-collapse. Will the movement survive when a key leader is assassinated? Exploring political theory through a fictional dystopia, Mallworld, Inc: Bound Together tries to answer the question, How can people be free in a world of modern communications and information technology? The ReBound Party, now governing an entire section, begins to liberate Mallworld's people from overwork, overconsumption, and bloody spectacles. The greedy Executive oligarchs fight back with a smear campaign in the holographic media, but ReBound champions the common people, proclaiming their philosophy of interconnection and coexaltation—of mutual elevation rather than exploitation. Fearing for their power, the oligarchs assassinate a revered activist, and ReBound supporters take to the streets but suffer a violent crackdown. When ReBound backs a labor strike against one of Mallworld's most powerful and abusive companies, the Executives threaten to burn down everything the movement has built. Can ReBound survive? In the vein of 1984, Brave New World, and Ecotopia, Mallworld, Inc: Bound Together tells the story of a future struggle for democracy in order to explore the political ideas that can reverse our democratic and environmental crisis today. A dystopia for the 21st century, it tackles issues of power, economics, identity, and equality, envisioning the transformation of the world into one devoted to coexaltation and human dignity.