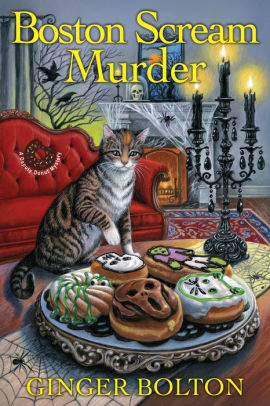 Halloween in the small town of Fallingbrook, Wisconsin, is the perfect season for Deputy Donut owner Emily Westhill to unmask a killer.

October 31 is just around the corner and Emily Westhill's Boston cream donuts, carved with a scream, have made an indelible impression on local eccentric Rich Royalson. So much so that he's ordered three dozen, with no screaming faces and twice the fudge frosting, for his seventieth birthday -- a special event in more ways than one. It's to be held on fog-shrouded Lake Fleekom where, twenty years ago, his wife mysteriously drowned.

But the next day, when Emily arrives with her Boston cream donuts, she stumbles upon Rich's corpse. The poor guy wanted a unique birthday bash -- just not one to the side of his skull. With a guest list of possible perpetrators left at the scene, Emily soon discovers that the Royalson closet is rattling with skeletons. As the fog thickens, motives mount, and the tricks outnumber the treats, Emily fears that Rich may not be the last one in Fallingbrook to go out screaming.
Reviews from Goodreads.com