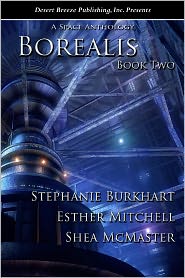 In orbit around Sestus-3, a minor star in a dying system half way between Corabora Prime and Pith, hovering at the edge of conquered space sits an aging space station under the control of the Trans Planetary Protectorate. The Borealis is slowly falling apart as the Protectorate funnels its massive resources into the border wars and keeping the outlaying systems in line, as insurrections break out and a subversive group known as The Rebellion gather and organize to take back what TPP has taken away. The Borealis is a hive of villainy where anything can be bought or sold - anything or anyone - if the price is right. Boasting the slogan 'The last stop for debauchery before falling off the edge of the universe', the station and its inhabitants do their best to live up to the motto. Once intended to function as a city unto itself when the universe first began to 'shrink' and Mankind spread out into the stars. Exploration turned into domination. Nearly a hundred years have passed since then, and now the Trans Planetary Protectorate governs all. The Borealis, once a thriving station, is now little more than a slum town, decrepit and crumbling. When the last stop to nowhere is the first stop to rebellion, the lives of a few outcasts are the only thing standing between the Universe and all out war.
Reviews from Goodreads.com