Bodies in the Boatyard — Ellen Jacobson 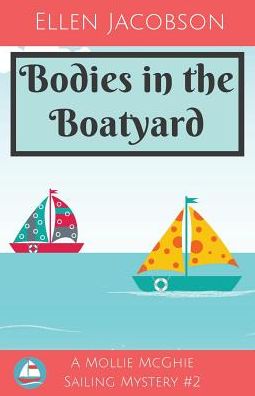 
Selling your house and moving onto a rundown sailboat—not a dream come true. Finding dead bodies in the boatyard—a total nightmare.

Mollie McGhie loves her beachfront cottage. When her husband announces that he wants to sell the house, downsize, and move onto their dilapidated sailboat, she’s not impressed.

When the boat starts leaking, she secretly hopes it will sink. Instead, they haul her out of the water and into the boatyard. Fixing the boat up is bad enough, but when Mollie finds someone has been killed nearby, things get even worse.

Mollie takes matters into her own hands and investigates the mysterious death in the boatyard, along with her adorable feline companion, Mrs. Moto. While she searches for clues, she meets more of the quirky characters who live in the small Floridian town of Coconut Cove, learns about sea turtles, overcomes her fear of public speaking, and, of course, eats way too many sugary treats.

Can Mollie catch the killer before someone else ends up dead?

If you like lighthearted and humorous cozy mysteries with quirky characters, adorable cats, and plenty of chocolate, you’ll love Bodies in the Boatyard.

1 - Murder at the Marina

2 - Bodies in the Boatyard