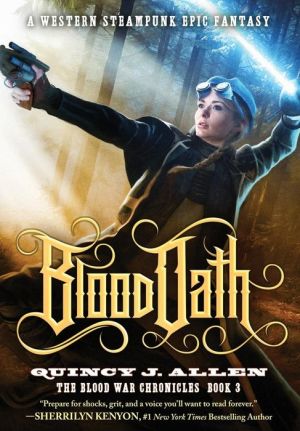 
In a world of magic, a clockwork gunslinger must stop a demon apocalypse from wiping out worlds. Starting in an old west you'd mostly recognize, this six-book series journeys beyond the boundaries of our own world and becomes an epic fantasy tale culminating in a demon war that tears deep... straight into the heart of Texas.

Blood Oath, the third book in the Blood War Chronicles, finds Ghiss and a band Orfeo ne Tsioch's minions seeking a relic that could lead them straight to Lady Corina Dănești. With Corina as Orfeo's captive, they could kick off a demon apocalypse and ignite a war that would destroy one world after another.
However, intel from Mad Emperor Norton has given Jake and his friends a fighting chance to beat Ghiss to the punch. Leaving Corina behind, they brave passage across the Traleil Sea to a world called Illenwikiakan, a world which once cradled the heart of a demon civilization. To reach their goal, they must cross a corrupted forest and enter an ancient keep that hungrily awaits the taste of fresh meat. Before the end, Jake will risk his very soul to steal away Ghiss' prize, paying one heavy toll after another in search of victory.
The first battle of Third Demon War has begun.