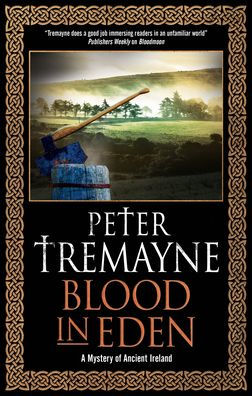 An outsider's life hangs in the balance when Sister Fidelma decides she must intervene to expose the real culprit behind the horrific slaughter of a local family.

Ireland, AD 671. The hamlet of Cloichín is said to be a veritable Eden, with its prosperous farms and close-knit, friendly community. But after a local farmer, his wife and two sons are murdered, a fanatical new priest orders the villagers to lynch the man accused of the crime. The only evidence they hold against him is the fact that he is a stranger to their land. Searching for accommodation on their journey home to Cashel, Sister Fidelma and Brother Eadulf arrive at Cloichín just in time to save the man's life. Fidelma is determined that the villagers must give the newcomer a fair trial. But there is to be more bloodshed in Eden and more lives will be lost.
Danger and mayhem disrupt this once sleepy and trusting hamlet. In this vivid portrayal of a medieval time, the webs of intrigue begin to unravel, friends become enemies, and no one knows who to trust....
Reviews from Goodreads.com

One thing about Peter Tremayne's books is that they are totally historically accurate. His knowledge of Ancient Ireland's laws and customs is very extensive. Sometimes his books get a bit pedantic and long-winded, but they are never boring because his Sister Fidelma books are impeccably written. His character development and his plotting are wonderful in each one. By my calculation this is the 30 or 31 book in the series, and I have read everyone. I did not realize when I began this series that I would get this much insight into life in 1st Century AD Ireland. This story begins with Eadulf and Fidelma returning home from a trip away from Cashel in the month of February 671 AD, when they realize that the inn where they planned to stay has burned to the ground. It is too cold and too dark to continue on to home so they decide to make a small detour to a small village called Cloichin (pronounced Cloggen) that Fidelma remembers as a small rural community that has fertile land and is often referred to as a garden of Eden. When they arrive in the village they interrupt a hanging and meet some pretty odious people who appear to be led by a fantastical Catholic priest. This story of greed, ambition, murder and mayhem leaves a lot of bodies lying around this supposed garden of Eden, and it's up to Fidelma and Eadulf to figure it out before more people are killed. This is a great series that never gets stale. For lovers of history like me this is a must-read series that is informative as well as entertaining.