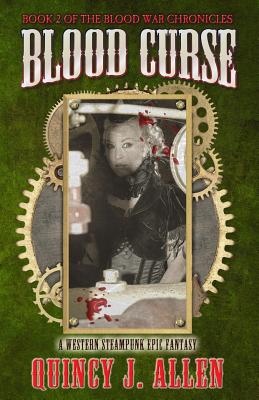 
“Prepare for shocks, grit, and a voice you’ll want to read forever.” ~ #1 NYT Bestselling Author Sherrilyn Kenyon AIRSHIP BATTLES A HIDDEN CITY ANCIENT FOES THE BLOOD WAR CHRONICLES A ruddy sun has set on the gauntlet that nearly killed Jake, Cole, and Skeeter in San Francisco. Storm clouds loom on the horizon, promising the inevitability of an airship battle with the nefarious Colonel Szilágyi. Blood Curse, the second book in the Blood War Chronicles, drops Jake and is friends into the middle of a war between the Free Territories and the Empire of Texas. In the shadow of warships, mechanized infantry, and spies, he discovers a world he couldn’t possibly have imagined and begins to understand what fate has in store for him. Jake doesn’t want that destiny, but his growing feelings for the Lady Corina Danesti lead him down a path of death and destruction on a scale that could encompass worlds.